OSA Brown Bag: The Physical and the Digital: A Test of the Reliability of Craniometric Data Collection from 3D Models

The University of Iowa, Office of the State Archaeologist’s Bioarchaeology Program is actively 3D scanning all diagnostic human skeletal elements in its possession to preserve data while still being proactive in repatriation/reburial of Native American remains. The 3D models acquired can be measured digitally in a variety of ways with new methods and technologies. This talk summarizes methods for collecting  and analyzing human craniometric data, typical research questions biological anthropologists address with such data, and a preliminary study of the reliability of collecting standard metric data from 3D models of crania. This involved: 1) assessing inter- and intra-observer error for landmark placement on 3D models, and 2) comparing landmark distances calculated with Stratovan’s Checkpoint software to standard measurements taken on corresponding physical remains. 3D models of 10 individuals’ crania were acquired with a NextEngine 3D scanner. Three observers independently placed 16 standard landmarks on the 3D models and exported the landmarks’ x, y, z coordinates. One of the observers conducted the same landmark placement two additional times and recorded 15 landmark distances both digitally and on actual crania. Mean standard deviations calculated for inter-observer error in landmark placement ranged from 10.79 to 0.21, with the majority of landmarks (14 of 16) having values of 2.06-0.20. Mean standard deviations for intra-observer error ranged from 1.92-0.19. With the exception of orbital breadth, orbital height, and interorbital breadth there were no other significant differences between landmark distances derived from 3D models and standard measurements of the crania. These results demonstrate a relatively high reliability for accurate data collection from 3D models of crania. Inconsistencies in inter-observer landmark placement and measures of the orbits are discussed.

Lara Noldner is the Bioarchaeology Director at the University of Iowa Office of the State Archaeologist. She started at the OSA in 2014 and is active in upholding the OSA’s responsibilities for the protection and proper treatment of ancient human remains and burial sites in Iowa. Lara received a B.A. in Anthropology from the University of Wyoming in 2006, and graduated from the University of New Mexico with an M.S. and Ph.D. in Biological Anthropology in 2013. Her research focuses on bioarchaeology and the interpretation of past lifeways from human skeletal signatures of biomechanical activity.

Brown Bags at the OSA is a semi-regular series where staff and guests share their research over the noon hour. Topics include individuals’ areas of interest, work in the field, developments in archaeology and architectural history throughout Iowa and the Midwest. Guest speakers whose expertise is in other areas pertaining to archaeology or ethnohistory may be invited throughout the year as well. For more information please go to http://archaeology.uiowa.edu, contact Maria Schroeder at the Office of the State Archaeologist; maria-schroeder@uiowa.edu;  (319)384-0974.

These presentations are free and open to the public. Attendees are encouraged to engage in discussion and exchange following the presentation. Individuals with disabilities are encouraged to attend all University of Iowa-sponsored events. If you are a person with a disability who requires a reasonable accommodation in order to participate in this program, please contact the Office of the State Archaeologist in advance at (319) 384-0732. 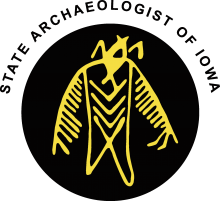 View on Event Calendar
Individuals with disabilities are encouraged to attend all University of Iowa–sponsored events. If you are a person with a disability who requires a reasonable accommodation in order to participate in this program, please contact Maria Schroeder in advance at 319-384-0974 or maria-schroeder@uiowa.edu.